He is a Fellow in the American College of Trial Lawyers and a member of the National Academy of Distinguished Neutrals.

Mr. Patton is a member of the Springfield Metropolitan Bar Association, the Missouri Bar, American Board of Trial Advocates, and the Missouri Organization of Defense Lawyers.

He is listed in The Best Lawyers in America and Missouri Super Lawyers and is rated AV Preeminent® by Martindale-Hubbell. 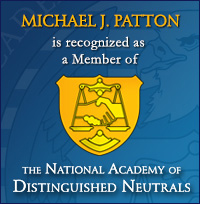